Did you know that knitters are competitive people?  I bet you thought that knitters were laid back since they spend so much time just sitting around and knitting.  Well, some knitters may be laid back, but I think we all have a very competitive nature.  We set goals for ourselves, crazy goals like knitting an adult sweater in 16 days.

Last month, you may all remember, I was in a competition called the Tour de Fleece, where competitors spin every day that the Tour de France rides.  I actually did really well.  I was happy with my results especially since I bought the spinning wheel just days before the competition began.  I even won a batt from The Fiber Universe for my spinning. 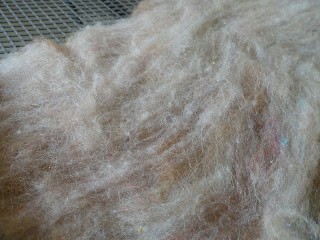 Pretty isn't it? The camera doesn't pick up all the colors.  There are some sparkles and sari silk in there.  It is my first batt.  I can't wait to spin it.

I am signed up for the Sweater Triathlon.  I think this may also count for Lace Long Jump.  Basically, I am attempting to make a lacy cardigan during the Olympics.  It will take about 1000 yards of worsted weight yarn to do this so I need to a lot knit every day.

I am this far: 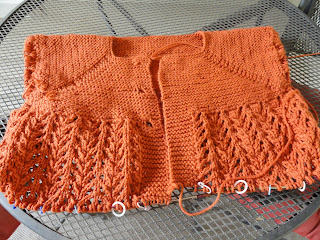 not too shabby for three days (at the time of photo).  Now that I have stitch markers in, the lace pattern is going so much easier. I think I can definitely finish on time or maybe even a bit early if I am really dedicated (aka not cleaning the house).

I can win fabulous prizes from my local yarn shop for participating.  But I'm not doing this for the prize.  I am doing it for the glory of making a sweater.