Saturday morning I woke up early to run the Bix7.

I am surprised at how many people have never heard of the Bix.  It is a big deal in Davenport and a lot of elite runners run it (well, maybe not this year because they the really elite are at the Olympics, but the next best were there).  I saw Ryan Hall (American Olympic marathon runner) win it in 2010.  I guess growing up in the Quad Cities and being a runner has skewed my perception of the importance of this race. Or maybe more people need to follow running.

Last year I ran the Bix for the frist time and it was even my first time running 7 miles.  Since then, I have run 7 miles many times and run two half-marathon races.  So I thought that this time had to go better than that last...

It did and it didn't.  I did have a better time that last year by about a minute, but I also stopped to go to the bathroom last year.  Without that break, I am sure I would have had a better time last year than this year.  I just was not prepared to run this race.  For last year's Bix, I had a better established running base and I was running outside more.  Due to the excessive heat this year (near or over 100* most days this month), I have been training indoors so, no heat and no hills.  The Bix is all about heat and hills. 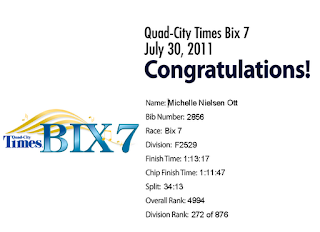 I need to ramp up my training if I am going to run the Quad Cities Half Marathon at the end of September.  I have been following the same training schedule as I did for my last half-marathon, but maybe I need to cross train a bit more and get my stamina up.  Maybe I just need to get some runs in outside.

What did you do this weekend?
Posted by Unknown at 5:00 AM