I can't decide which is worse, my husband being home or being out on business.  Both have pros and cons.  It is just really hard to get used to my husband being around only sometimes.  It is hard on our daughter, too.  Especially when he is gone for several nights in a row.  She just doesn't have a good concept of time, as a three-year old should.  She thinks every noise is her daddy coming home.

Last week while out on business, my husband calls and says he is sick and in horrible pain.  He is in a hotel that is a 3 hour drive away.  I tell him to go to the ER and he does to find out it is not an appendicitis, as I suspected, but kidney stones.  So, now he has to follow up with a urologist in Peoria.  He tried to make an appointment but could not get a hold of the person and played phone tag until I finally made the appointment. He went in today and things are good.

Also this week, my husband decided to finally get his eye infection checked out.  He has has this eye infection on and off for over three years.  He goes to the eye doctor and is referred to another eye doctor specialist.  Yesterday afternoon, after his second eye doctor appointment of the week, he finds out he has rosacea on his forehead (I thought it was just bad skin) and it is in his eye.  He received meds to clear it up, but his eye will have permanent scarring and rosacea has no cure, so this will be a lifetime issue.

This has been weighting on me all week.

Also, it seems that everything I did at work this week had some flaw or error in it.  For example, I made 30 color copies instead of 3, I was late for meetings (I am never late, always early) and I spilled water all over my chair.  I was just off my game and I could not figure out what was wrong.  I think the family life stress was just seeping in to my work.  I couldn't get caught up with work.  I didn't have much time to workout.

All the human doctor appointments are over this week and the future looks clear.

Oh and to finish it out, I had a vet appointment with both dogs. 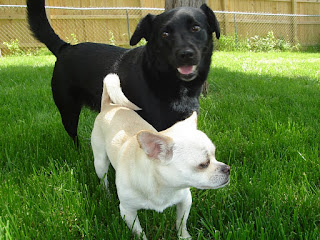 Ten Things We Did: A Review

Last night I finish my current YA read Ten This We Did (And Probably Shouldn't Have) by Sarah Mlynowski.

It is a cute book.  The protagonist, April convinces her father and step-mother to let her stay with her friend Vi in Westport, Connecticut  instead of moving with them to Ohio.  April stayed in Westport when her Mom and brother moved to Paris, there was no way she was leaving to go to Ohio.  There is one catch, April's parents don't know that Vi' mom will be in Chicago all semester in a theatre production.  This leaves two high school girls unsupervised.

As a book with teenaged girls unsupervised would have it, there is a lot of drinking and sex talk in this book.  Not that I mind that, that might be the only real premise in the book that I could believe.  The rest of the premise what totally unbelievable.  I didn't even really like April.  She was a bit whiny and dense.  She paid $3k for her  (free) cat to have surgery after it was hit by a car.  She just doesn't live in the real world.  I guess if i am going to read realistic fiction it should be realistic.  If I read fantasy it should be fantasy.  This book is in the middle, she is living a fantasy life in the real world.

It is not a bad book, but it is not to my liking at all.  I do see what is appealing about it, especially since a lot of YA books try to take parents out of the picture by setting the story in boarding schools or having little parental involvement.  This is a new twist on that setting that I haven't read. But who could really convince their parents through random impersonated phone calls and emails that it is OK to stay in a house unsupervised? And on top of that have a father give you $1000 a months in spending money.

Next book....Pearl by Jo Knowles, Wintergirls by Laurie Halse Anderson or Shut Out by Kody Kiplinger.  Not sure which one will win out.  Or maybe I'll read my book club selection  Art of Racing in the Rain.
Posted by Unknown at 9:34 AM No comments:

Since I began knitting  a few years ago, I have wanted to knit socks.  Not sure why.  What is the appeal of spending hours and hours on something that you can easily buy in bulk, which would be faster and much cheaper. Did you know that a hand knitted sock pair is made up of  thousands of stitches and sock yarn can cost beaucoup bucks. Still, there is the allure of sock knitting.  It is a compact project so it is easily portable.  There are beautiful sock yarn in tons of alluring colors.  Also, it is a challenge.

To learn to knit I sock, I first had to learn a new method of knitting. I love knitting things in the round.  Usually they are hats.  I had not done anything with a small diameter because I hate knitting with double-pointed needles.  I am just not a fan.  So, I had to learn how to magic loop knit.  It is actually not that hard.  I picked it up right away thanks to this video tutorial from Knittinghelp.com

Knitting help has taught me a lot since I do not have any knitty friends that are more advanced knitters than I am.

With magic look I started my sock and I am pretty far along.  I have just finished my heel flap and about to begin my gussets. 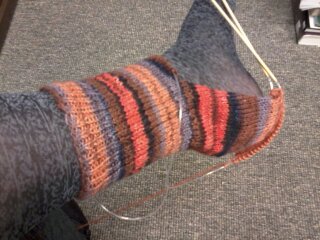 I started knitting this over Labor Day weekend so it is slow going.  I just have not put a lot of time or effort into it.  Not sure when I will get time or effort, but I'll keep looking.

Posted by Unknown at 4:32 PM No comments:

Not only do I run , I read about running.  It helps two of my obsessions hobbies work together.  This week I got to do both.  I ran 6 miles on Sunday and read Ultramarathon Man: Confessions of an All-Night Runner by Dean Karnazes.  I feel so under-achieving when I read about his accomplishments.  This is his first book, but the second one I have read.  I read 50/50 last year.  It is nice that you can read running memoirs out of order.  I hope to read his latest book Run! soon.

In Ultramarathon Man, Dean describes his beginnings in running from kindergarten to high school to his new ultramarathon obsession starting at age 30.   Dean inspires me to do more; to be a better person and to run farther.  He is pretty funny, especially if you enjoy running humor.  He is pretty crazy, as he runs races over 100 miles. He forgoes sleep so that he can be a family man and runner.  Pretty amazing in my book.  I could never be like him because I could never give up sleep to run.  I love running but I really, really love sleeping.  I highly recommend this book, I couldn't put it down.  I read it all within 24 hours.  It is for runners and anyone interested in why someone would run.  I gave it 5 stars on Goodreads.

Posted by Unknown at 3:41 PM No comments:

So this second part is coming a bit later than planned.  I am having trouble finding time to blog.

The Friday before the race, my wonderful friend and I headed out to the race expo.  There we got our race packets and visited all the different vendors.  I picked up some swag and purchased some of my own.   We also met up with my friend's friend who was also running the race.

The meal before the race is apparently very important.  I have never paid much attention to it.  Apparently that is OK too.  My friend's husband is a very good cross country coach and he said just to eat normally and not carbo-load or anything.  We had pizza for dinner and it was wonderful.

After a good night's sleep we were up and ready to run.  We drove to downtown Nashville and walked to the Country Music Hall of Fame where the starting and finishing line was located.  At this point I was on my own.  My friend and I were in different corrals based on our mile time.  Before I knew it we were off and running.  And running....and running.  I still had not come to terms with the fact that I would be running 5k further than I ever had before.  I knew I could do it. but I still had reservations.  My friend's husbands and children watched us run and the did a fair amount of running too.  They moved several times to see us through the course.  Around mile 6 or so I saw my friends from Divinity school and church.  They had even made a sign for me "GO MRNO!"  One of them even ran with me for a few minutes.

There were good things and bad things about knowing where I was on the course.  I was not exactly sure of the course but I knew where I was in Nashville and I knew where I ended.  Mile 10 was very close to the finish line but then you have to make a turn and go up a hill, across a river, through the Titan's LP field and over a very steep bridge and back to the Country Music Hall of Fame for a total of 3.1 more miles.  They actually went better than I anticipated and beat my goal time of 2:10.  One thing I will say about this course is that it is hilly.  You are either going up or coming down.  There seemed to be no flat parts at all.

I ran 13.1 miles.  I did it in 2 hours 6 minutes and 51 seconds.  Well at least that is what my watch said.  My timing chip broke so there was no official time for me.  The very nice timing people went to the back-up timing to add me to the official finishers roster.  It feels great to be an official finisher.
Posted by Unknown at 9:56 AM No comments: