In the wake of the Second Great Awakening (a protestant revival movement in the late 18th and early 19th centuries), William Miller formed a group of followers called Millerites.  Miller, as was common at the time, believed that the second coming of Christ was happening very soon.  After a close reading of the book of Daniel he prophesied that Christ would return on October 22, 1844.  Millerites sold all their possessions and awaited the coming of Christ.  Christ did not come and the event is known as The Great Disappointment. Millerites reformed and some became Adventists, some decided that instead of an earthly event on October 22, a heavenly even occurred, some joined other sects.  They moved on, though greatly disappointed.   This is one of my favorite lessons from Betty DeBerg, one of my religion professors at college.

This week I've had my own great disappointment.  On Monday, at my weekly check-up, my midwife told me she was concerned about my dropping platelet level (it took a pretty big nose dive last week) combined with my other issues.  She ordered a blood draw and said she would like to induce me this week, if my levels continued to drop and the perinatologist said it was okay to induce.  I got very excited- very, very , very excited. And so did my family.

This pregnancy has not been the easiest of roads (but not the hardest either, I know many women who would love to have (or have had) my level of healthy pregnancy) and I am ready to have a baby and not be pregnant anymore.  I want to regain feeling in my hands.  I want to easily see my feet again and wear normal shoes again.  I want to pick up my daughter.  I want to be able to go upstairs without loosing my breath or go grocery shopping without becoming totally exhausted.  I thought this induction was the answer to my wishes and prayers.  I had it all planned out- who would watch D, when my in-laws and parents would come down, and I got everything ready for my leave at work.  Most excitingly, I would get to meet my son.  I am so excited to have this baby (even if he is nearing the 10 pound mark).  I want to hold that baby in my arms and show him to the world saying, "I made this, this is my son, [insert name here]."  Then, my midwife called and told me my platelets only dropped a little bit, not the big drop she was expecting, so no induction this week. Total disappointment, plans out the window.

I am happy that my platelets are not too low, but I am also bummed that I'm not having a baby this week (unless he wants to be born,  c'mon baby!).  But like the Millerites, I will move on.  I will make the best of the situation.  This baby will come in the next few weeks, I just have to be patient (not my strong suit) and wait for the right moment.

Have you had any great disappointments?
Posted by Unknown at 12:00 PM No comments:

Today is the day I have been aiming for.  It is July 1st which puts me at 37 weeks pregnant, technically full term and in the same calendar month as my official due date.  My baby could be born any time now without much issue and I am ready.  I am 49" around; that is over 4 feet.  I am not sure anyone should every be that round.  I wasn't sure I'd make it this far along with my huge belly.  I have polyhydramnios which means I have above normal levels of amniotic fluid.  Not super high, but high enough that I have to see a specialist.  I am really good having obscure pregnancy conditions.  With D it was thrombocytopenia, which is low platelets.  My platelets are on the low end this time too, but not in a range that is concerning.  My iron levels however are also low this time and I am taking nasty iron pills.  At least I got him to flip from transverse (sideways) to head down or else I would have had to have a version to try to move him.  Did I mention he is already much larger than D was at birth?


Despite my size (which is causing quite a bit of fatigue), I am getting some things done.

I finished his baby blanket a few weeks ago... 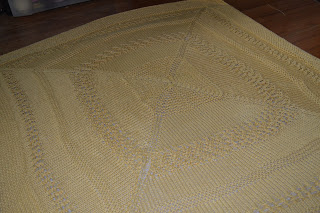 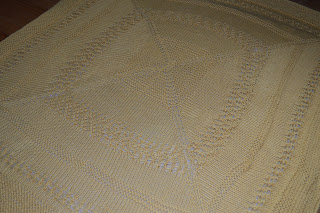 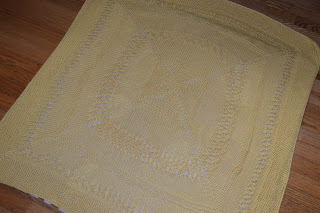 I really love it.  I had a small issue with the center unraveling when I washed it, but I sewed it all back together.  If anyone tries this pattern, I would suggest crocheting the first few rounds.

The pattern is Honeycomb by Nikki Van De Car and I used Knit Picks Comfy Worsted yarn in Creme Brulee. I really like how soft and washable the yarn is.

I am lucky I finished it when I did because the swelling in my hands continues.  I am actually getting used to having semi-numb hands and fingers, but I have no desire to knit or crochet and I have a long list of projects to do.  This is all part of the dull ache of "general pregnancy discomfort" as my midwife calls it.

I do have his room all ready and all his clothes washed.  My hospital bag and his are packed and in the van.  His car seat is installed.  We have officially decided on a name (to be revealed upon his birth). D is taking a big sister class on Sunday. Our cloth diaper rental is ordered. Things seem to be in order (have I ever mentioned I like order, librarian tend to love order).

Now all I need is some nesting to kick in so I can crazy clean this house.  Oh and for labor to start.  I am not looking forward to labor, but I really, really want to not be pregnant any more.

What are you looking forward to?
Posted by Unknown at 7:05 PM No comments: