I grew up in a family dependent on photos.  I have photos chronicling every second of my life it seems.  If it is not in photos, then it is on video.  That is just how my parents were (and still are, but to a lesser degree).  Before any big even we knew the routine: photos and video camera.  It was just a normal part of life.

I have now come to realize that this is not a normal part of life for some people.  All of our family's photos are printed out or developed and are in photo albums, in order with dates on them.  This seems like a normal thing to me and I have continued the tradition of taking zillions of photos and putting the date on the back of each and sliding them into photo albums. Even though I married a man hates photos.

I wonder how one can hate photos.  They are wonderful snapshots into the past.  I have taken my daughter to get her pictures taken at a studio many, many times in her three years.  In her first year of life she went 4-5 times, now we go twice a year.  But, something happened.  This fall has been crazy.  I scheduled family portraits, but my daughter came home with a large scratch on her face and my husband had an eye infection causing his eye to be right red.  I cancelled that sitting.  That was in October.  I have yet to find time to re-schedule.

He not so much hates photos as he hates taking them and being in them.  I think he inherited this trait from his parents, as I inherited my own trait from mine.   He also can't understand why I have so many pictures of my knitting.

I do have one consolation.  We did take a nice photo for the Christmas cards (though two week after I wanted to get this picture taken).  I am less pleased with how I look (taken on a day with no make up and came home from work sick) but very happy with the rest of my family. 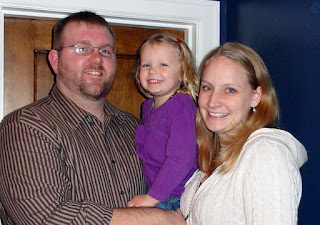